The cost of Marmite, and Brexit’s quiet fear gauge 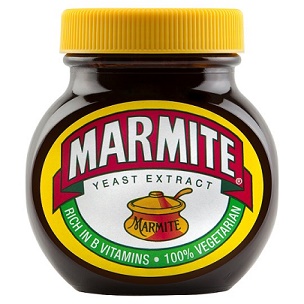 Give me a sign
Just as high priests in Roman times, after slaughtering their offering, examined its entrails to gauge the Gods’ favour,  so too have UK commentators been searching for any statistical insight or market data point to declare whether the shock Brexit result is likely to lead to economic success or failure.

The data point phoney war
The data that has come out since the EU Referendum on 23rd June 2016 is meaningless as we still don’t know what Brexit looks like.  It’s been a phoney war for headlines, as stunned commentators search for a gauge to measure policymakers by.

When politicians use statistics, it’s dangerous. When they co-opt data, it’s dynamite.

First we had encouraging PMI Data.  Brexiteers (those who want the UK to leave) read this as vindication, which is a stretch to any rational observer given the pace of transmission in the economy.

Next we had Bremainers (Brits wanting the UK to remain in the EU) shouting “Pound Down/Told You So”, whilst Brexiteers shouting “Footsie Up/Told You So”.  It took a while for pundits to figure out that both sides were right, because they were unknowingly saying the same thing.  This is because the FTSE 100 (Footsie), consists of companies with predominantly overseas earnings.  Hence the UK’s bell-weather index gains were more a function of the pound’s slide, rather than any inherent strength in the economy.

Marmite makes it real
But perhaps what has hit home hardest is the 24-hour Marmite price spat between two behemoths, Unilever (NYSEARCA:UN; LON:ULVR) and Tesco (LON:TSCO), which led to a tabloid induced panic.

Marmite is the salty yeast-extract paste either loved or hated by Brits on their toast.  Its main ingredient is the sludge left over from brewing beer, so it seemed odd that a UK product with UK input costs should be at risk from a price hike.  But given Unilever’s equipment, cost of capital and investors are looking for Euro denominated returns, the impulse to raise prices was clear. So Unilever wanted to raise prices +10% to offset the -15% fall in the pound.

Tesco, the UK’s largest grocery, with enlightened self-interest wanted to shield consumers and share the pain with their supplier.  For the time being, retailers are shielding consumers from price rises.  But that go on forever.  The consumer pain from weaker currency will eventually be felt, and will have an inflationary impact.

This is the UK’s “quiet fear gauge” for Brexit, as it is not referenced in the tabloids. 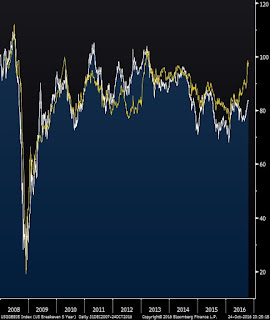 Source: Bloomberg: USGGBE05 Index & UKGGBE05 Index, rebased 31-Dec-07=100
Whilst a long way from the Goldilocks dream of moderate growth with inflation that was ‘just right’, the chart shows that the big bad deflationary wolf of 2008 has been vanquished by the fairytale money created by Quantitative Easing, and inflation targeting is, broadly, back on track. For now.

Hard Brexit is inflationary
Since the UK’s EU Referendum on 23rd June 2016, relative inflation expectations have dramatically diverged.  Whilst the US has notched up slightly to 1.584%, the UK has rocketed to 3.052%.  Unhappily for the UK’s new Prime Minister Theresa May, the bulk of this uplift can be pinned to her ‘Hard Brexit’ reference in her speech at the Conservative Party Conference on 2nd October 2016.

The logic for this is brutally consistent.  Hard Brexit means harder trading conditions which means slower growth and weaker pound.  Slower growth and rising inflation is a painful combination, and would prove a gruesome challenge for the Bank of England.

Carney’s Mission Impossible?
Whilst deflation loomed, and inflation remained subdued, the era of ultra-low or zero interest rates was a possible and necessary lever of support.  If the Cabinet are hell-bent on hard Brexit, Governer Carney will face a near impossible mission:  to defy gravity by keep rising inflation in check (around the 2% target) whilst propping up the economy (and the markets) with a 0.25% Base Rate.

The Cabinet’s staunchest Brexiteers are still traumatised from ‘Project Fear’ (when the machinery of Cameron’s government lined up behind “Remain”).  There is therefore additional political risk if Carney’s apprehension at this impending challenge is construed as partisan, and his position is made – by coercion or insinuation – untenable.  Personalities and emotions in the broken love triangle of Prime Minister, Chancellor and Governor will matter here.  In that respect the venality of the post-Brexit reshuffle is not encouraging.

Wishful thinking would suggest that perhaps the Cabinet’s discussion of a hard Brexit is a cunning plan to fox our EU counterparts before negotiations start?  Sadly, given the lack of preparation exhibited by the Brexiteers on their unexpected victory, that would ascribe too much credit, where none is due: whilst cunning was in abundance, there was no plan.

Inflation-protecting a portfolio
For US and UK portfolio investors, 1.5% and 3% respectively are now the hurdle rates if 5 year returns are to be ‘real’.

For long-term multi-asset investors, it is worth considering how best to inflation protect each element of their portfolio


No clear plan
Either a clear Remain vote, or a clear Leave vote with a prompt articulation of what Brexit means (the Norway model? the Turkish model? the Swiss model?) would have given UK markets the certainty investors crave.

But now four months on, the Government is, it seems, simply making up what Brexit means as we go along, and trying to keep irreconcilable interest groups happy.  There seems to be one message from the Government to Japanese car manufacturers, another to the City, another to the EU, and very little, of course, to the electorate: just that, with crypto-clarity “Brexit means Brexit”.

A real fear gauge
This lack of clarity and lack of direction is creating real economic costs, and will ultimately hit everyone in the pocket for more than just Marmite.  The upward march of the UK breakeven rate is the fear gauge for that: watch it.

NOTICES: I/we have no positions in any stocks mentioned, and no plans to initiate any positions within the next 72 hours.  I wrote this article myself, and it expresses my own opinions. I am not receiving compensation for it.
This article has been written for a US and UK audience.  Tickers are shown for corresponding and/or similar ETFs prefixed by the relevant exchange code, e.g. “NYSEARCA:” (NYSE Arca Exchange) for US readers; “LON:” (London Stock Exchange) for UK readers.  For research purposes/market commentary only, does not constitute an investment recommendation or advice, and should not be used or construed as an offer to sell, a solicitation of an offer to buy, or a recommendation for any product.  This blog reflects the views of the author and does not necessarily reflect the views of Elston Consulting, its clients or affiliates.  For information on Elston’s research, products and services, please see www.elstonconsulting.co.uk
Photo credit: Google Images; Chart credit: Bloomberg Professional; Table credit: N/A

Popular posts from this blog

February 24, 2016
"Asset allocation is not everything. It's the only thing." One of the harshest lessons of the Global Financial Crisis was that when the going gets tough, correlations trend to one, giving even diversified investors very few places to hide.  It wasn't about whether or not you got burned, it was a more a question of degree. While there's a time and a place for active stock selection, from a portfolio construction perspective, it's the active management of the overall asset allocation that affects the outcome. Using ETFs for portfolio construction The growing popularity in Exchange Traded Funds is in part because of their elegance in providing broad, liquid, efficient and cost-effective market access to most major asset classes with a single trade.  We now have a broad range of building blocks with which to construct a diversified portfolio. As a result, the problem for investors has shifted from "How best can I access a broad choice of market
Read more

July 06, 2016
Confidence that UK equities having "made up lost ground" post-Brexit is misplaced. The largest UK companies that make up the bulk of the FTSE 100 and the MSCI UK Index have high exposure to global earnings. Apparent "strength" in the largest UK equities is just a translation effect of that revenue exposure. So the apparent uptick in UK equities offers no real comfort for global USD-based investors. For GBP-denominated ETFs tracking MSCI UK Equity (e.g. LSE:CSUK) performance is +3.7% since the EU Referendum Day 23rd June 2016 before votes were counted. Over the same period, the USD version of the same ETF (e.g. NYSEARCA:EWU) performance is -9.3% while sterling has weakened -12.4% (FXB). Performance of MSCI UK (LSE:CSUK) in GBP since EU Referendum Performance of MSCI UK (EWU) in USD since EU Referendum Chart Source: Google Finance
Post a comment
Read more

March 03, 2017
Commerzbank launches a certificate that tracks Elston’s multi-asset Minimum Volatility Index to provide a “Liquid Alternative” investment strategy The index was launched in December 2014 and has a two year track record The strategy has delivered on its target of providing diversified, differentiated returns with minimised portfolio volatility MEDIA RELEASE 3 rd March 2017 ETF specialist Elston Consulting announces today that is has successfully licensed its Elston Strategic Beta Global Minimum Volatility index (ticker ESBGMV) to Commerzbank for the creation of an investable certificate that tracks this innovative index.  The certificate is issued with an initial notional of £10m. Whereas most Min Volatility indices relate to a single asset class such as Global Equities, Elston’s approach was to launch an index that targeted the minimum volatility portfolio created from a globally diversified range of asset classes represented by low cost iShares® exchange trad
Post a comment
Read more